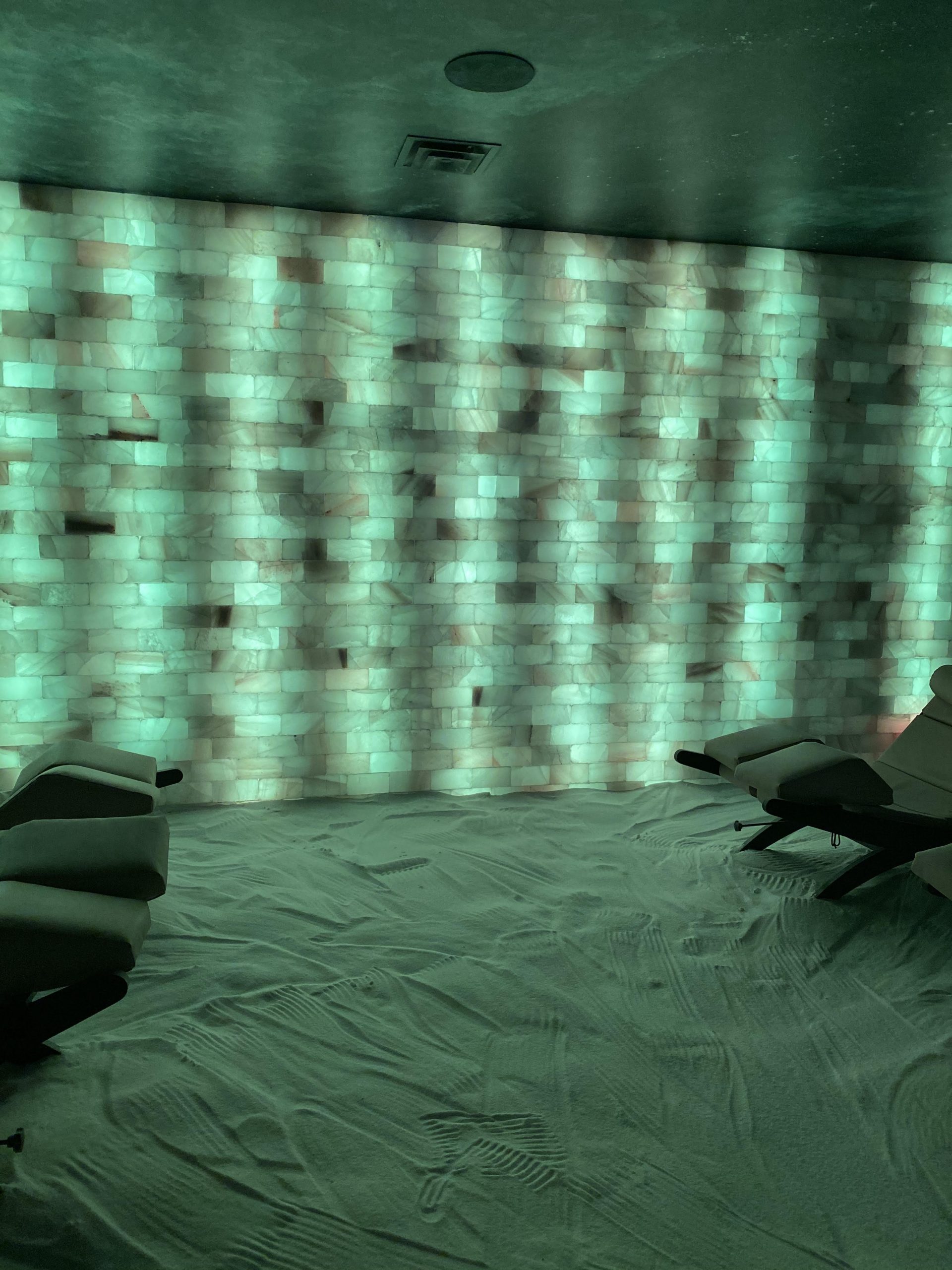 You might think you have it all down pat when it comes to relieving everyday body issues. Headache? Pop an over-the-counter pain pill. Stuffy nose? Slurp some hot soup. But what if there was one thing that could solve all those problems at once?

Halotherapy, also called salt therapy, can do all that and more. The treatment essentially involves sitting in a room filled with rock salt and inhaling salty air that’s being pumped in by a halogenerator.

While the natural-healing practice has a history rooted in Europe, with some of the earliest known salt caves in Poland, these salt-filled spaces are now popping up in spas and yoga studios. They have benefits like decreasing the symptoms of the common cold, as well allergy symptoms, detoxifying the lymphatic systems, improving sleep, and alleviating some skin conditions.

Unlike table salt, which is stripped of most of its natural minerals and fortified with iodine, the Himalayan rock salt you’d find in these caves is rich in minerals such as calcium, potassium, magnesium, sodium, iodine, bromine, and copper. So, in theory, you absorb these minerals when you breathe the salty air.

Additionally, the negative ions in salt have been said to improve mental health conditions like depression, stress, and anxiety. These negative ions may also combat the positive ions emitted by computers, TVs, and cell phones.

Some of the conditions known to respond positively to the Salt Room:

Each session is 45 minutes long

While in the session, please refrain from talking

No cell phones or electronics in room

In order to ensure you get in your session, please arrive at least 15 minutes prior to appointment time

Just one infrared sauna session can produce the same cardiovascular results and calories burned as an hour of vigorous exercise, without the muscle pain or risk injury.

Infrared heat increases your blood circulation and stimulates the sweat glands, releasing built up toxins in the body.  Perspiration is a natural way of expelling these toxins from the body and infrared sauna generate a sweat nearly 7 times more detoxifying then a traditional or steam sauna.  Detoxification via infrared sauna therapy is commonly recommended  for those suffering from chronic fatigue syndrome, multiple chemical sensitivities (also known as environmental illness), and fibromyalgia.

The deep heat of an infrared sauna helps peripheral blood vessels dilate, Bringing relief and healing to muscle and soft tissue injuries.  Increased blood circulation carries off metabolic waste products and delivers oxygen rich blood to oxygen depleted muscle, so they recover faster.   Muscle are also able to relax more readily when tissues are warm, for greater flexibility and range of motion.  Infrared heat relieves muscle tension. thereby helping your body to make the most of its intended healing abilities.  Infrared heat reduces soreness on the nerve ending s and muscle spasms as muscle joints and fibers are heated.

As you relax in the gentle infrared heat, your body is actually hard at work producing sweat,  pumping blood, and burning calories.  As your body increases sweat production to cool itself, your heart will work harder to pump blood at a greater rate to boost circulation.  This increase in your metabolism will burn calories.  According to the journal of American Medical Association, “Many of us who run do so to place demand on our cardiovascular system,….regular use of a sauna imparts a similar stress on the cardiovascular system, and its regular use may be as effective a means of cardiovascular conditioning and burning of calories as regular exercise.

Saunas also increase serotonin, a powerful hormone associated with relaxation and sleep. Following a sauna, people show more brain waves related to deeper, more restful sleep. As soon as you take a seat or lie down in one of our IR saunas, FAR infrared waves begin to penetrate 2 to 3 inches into your body. These waves create a deep heating action, which activates the sweat glands. Sweat glands function in our body to naturally eliminate and expel waste materials and toxins. Since skin is the largest organ in the human body, the deep heating of the sweat glands allow for a deep detoxifying sweat.
The human body is comprised of 70% water molecules. FAR infrared waves cause these molecules to vibrate. This vibration reduces the ion bonds and breaks down the water molecules. These molecules often encapsulate gases and other toxic materials.

Far infrared rays have wavelengths of 8-14 microns. These waves are especially good for the human body and directly cause the deep heat and the raising of an individuals core temperature from deep inside. This allows for improved blood circulation as well as recovery from fatigue. These rays consist of similar wavelengths as that which is emitted naturally by the human body. This is one reason as to why many individuals feel rejuvenated after an IR sauna session.

Today, many healthcare professionals use far infrared heaters to treat a variety of diseases throughout the world.

A Perspire Sauna Session is completely safe and produces the same far infrared heat produced by the sun. Sunlight is a combination of visible and invisible light. The seven colors of the rainbow are visible lights, the infrared rays are ultraviolet, rays are invisible lights. It is the far infrared energy that is the most beneficial, penetrating the skin and increasing circulation to help rid the body of harmful toxins.

The Far Infrared heat is required for all living things for optimum health. The radiant heat from our IR sauna surrounds you and penetrates deeply into your joints, muscles and tissues, speeding oxygen flow and increasing circulation. Using our IR saunas helps to remove impurities from your cells, specifically the cells inside our fat where our body stores waste and harmful toxins such as cholesterol and heavy metals.

Regular use of our IR saunas will help provide a lifetime of healthful living.

Please refrain from wearing perfume, lotions, spray tans, or makeup as this can inhibit your skin’s ability to release toxins through sweat.

Please drink plenty of water before, during, and after your session.  You are welcome to bring water into the sauna in a closed container, but please do not get water near any of the sauna’s heaters.

Sauna safety When in doubt, please consult your Physician prior to use.  Do not use if you are pregnant, have serious inflammation, a fever, or communicable disease, acute bleeding, or are intoxicated or dehydrated.